There's been lots happening on the spanking blogs this last week, including several posts relevant to Dreams of Spanking, so I thought I'd bring you the highlights. Nimue Allen has been writing about her experiences of shooting for us lately. Here's what she has to say about filming "The Evil Babysitter" with Sebastian Hawley:

This one was SO MUCH FUN to shoot. It’s not often that as a young, female top I get to be creepy and inappropriate, usually older male tops get cast in those sort of roles. Sebastian played the sulky teen beautifully, and we had a lot of laughs during cuts at just how creepy and inappropriate the dialogue we were coming up with was. But in the end, it’s fairly ambiguous as to who was actually manipulating who!

I love getting the chance to work with Dreams of Spanking. Pandora puts a lot of thought into the scenes she scripts and the people she puts together for them. She also has several gorgeous male spankees, as well as the usual lovely ladies, and is putting a lot of focus into unusual power dynamics and switching scenes as well, which is wonderful for a dominant(ish) masochist like me to see!

Red Rump, the talented character artist specialising in smoking hot domestic F/M, was very gracious about my using his artwork as the inspiration for a spanking video. In fact, he was so chuffed he created a followup piece as a thankyou - and it's a bit more graphic than the original! 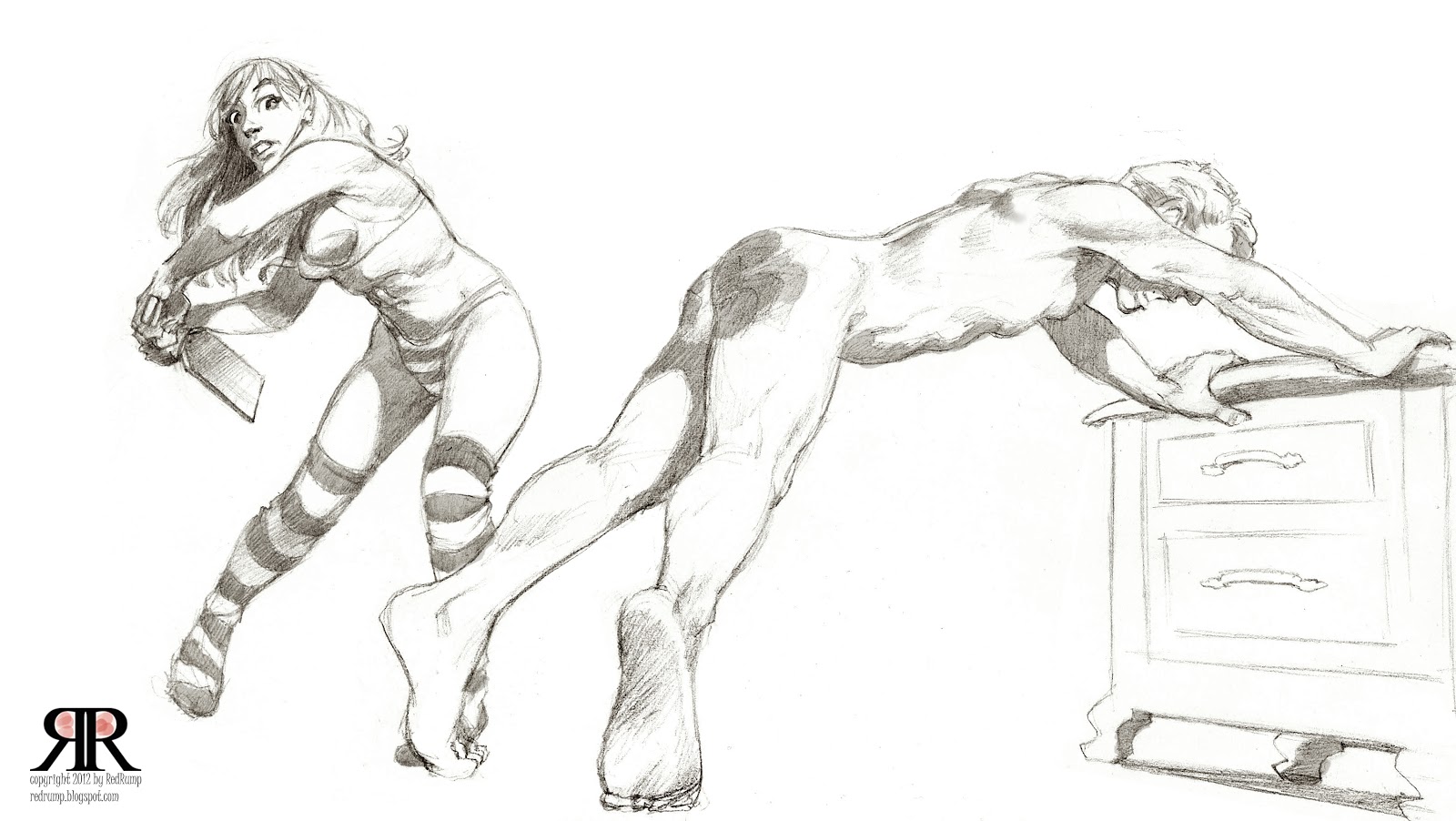 THANK YOU, Pandora! It's always gratifying for one artist to know that they have offered some inspiration to another. (and to see them wield a paddle in stripey socks...)

Thank YOU, Red Rump! I hope our video makes more people aware of your excellent art. If you haven't checked out Red Rump's blog, do - the quality is outstanding, and it's a must see for any fans of vintage and domestic F/M.

Bonnie of My Bottom Smarts recently ran a spanko brunch very relevant to the theme of this site. She asked, "Do you have dreams about spanking? If so, how different are they from than your real life experiences?" People's answers varied, and you can check out the brunch participants responses here. If this topic interests you, feel free to answer Bonnie's question yourself in the comments.

Journey to the Darkside

Padme, a Canadian blogger who writes about her dominant/submissive TPE relationship at Journey to the Darkside, recently posted on twitter about wanting recommendations for spanking videos to watch. I directed her to this site, and decided to offer her a review pass. This site is primarily built with kinky women like me in mind, and I was very interested to see what Padme would think.

As it turned out, she loved it. She praised the quality of the productions, genuine chemistry and passion between the players, and she appreciated good looking male spankers Thomas Cameron and Jerry Diamond. Padme picked out the D/S elements and domestic belt whippings as aspects of scenes she particularly enjoyed, and described how watching the videos with her Master inspired a hot play date.

I was really chuffed at her response - it's lovely to hear that likeminded ladies in spanking relationships are looking for the same sorts of things as me in spanking videos. You can read her full review here.

December is awards season, when spanking bloggers let their readers vote for their favourite sites this year. Of course these "awards" are entirely unofficial and just a bit of fun. The biggest is run by an American blog and tends to focus on US sites and performers - I've enjoyed voting over the last few years but pretty much accepted that as a UK name I'd never be nominated. (It's also an /F spanking blog, and doesn't feature anything to do with men getting spanked.) So I was delighted to see Dreams of Spanking in the running for Most Improved Spanking Site.

A year ago today this site was still in its pre-launch phase and didn't have a member's area! There isn't an award for Best New Site or Best Site - the idea is to honour the producers who have invested the most effort in their project over the last twelve months. There are some great sites in the running, including Spanking Sorority Girls, another new site. It's amazing to be nominated, especially since so many of the people nominating the site were women.

Voting is also open for 2012 Spanking Blog (Creative), New Spankee and Best Facial Expression During a Spanking, and voting for more awards will open soon.

In response to the US emphasis of the Spanking Spot Awards, Sarah Bright has started her own awards, the Best of British. Voting is very simple - there's no nomination and poll system, just a single post where each comment is counted as one vote. I love Sarah for opening her poll to all of UK spanking, including spanked men. It would be great to see some of our talented male performers such as Michael Darling, Sebastian Hawley and Jimmy Holloway in the running, as there are so few websites dedicated to celebrating the male spankee.

All the UK producers I know are genuine enthusiasts dedicated to bringing their own vision and fantasies to life on camera, so they are all deserving candidates for the Brit Awards. Voting is dead easy: just click this link and leave a comment naming your preferences for the categories that interest you.

In non-blog news, finally, D and I have finally put up a page up for our web design and web development services. Dreams of Spanking has occupied a lot of our attention this year but now that the content management system has a year's experience handling adult e-commerce, we wondered if it would be useful to anyone else. With D's expertise developing web applications and my eye for design, we can build you a powerful, beautiful website. If you've got a kinky project that needs a web presence, get in touch.

Posted by Sarah Bright at 11:18 on 6 Dec 2012
Thankyou for mentioning the Best of British Awards. We, as a country seem to have faired much better this year in the Spanking Spot Awards. It is fantastic that we are recieving recognition for our hard work but I still feel that we should celebrate our 'Britishness' in our own open vote.

It is of course light hearted and there is no prize to be won but it is interesting for me as a producer to see what people actually think of the Spank Sites. It has to be said that despite how much we all love to produce spanking content, without members we would not be able to continue.

For those of you reading this, pop over and vote please. It may help your favourite win. You do not have to vote in every catergory and it will take a matter of minutes

Posted by Pandora Blake at 11:29 on 6 Dec 2012
Yes, I was pleased too by how much of a showing the Brits had in the Spanking Spot awards, but I couldn't help noticing that there was a certain amount of editing to some of the nominations. My nomination of Molly Malone for best newcomer was echoed by others but the blog editor decided not to put her through for voting. Thanks for curating an alternate awards, it's lovely to see more of our UK performers getting the recognition they deserve!